Totally Dynamic were delighted when they were approached again by Chelsea FC to wrap 2 open top buses for them, to help them celebrate both their FA Cup and Champions League Cup final wins. 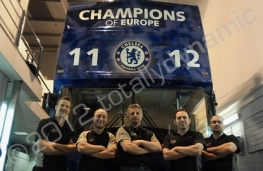 The parade takes place less than 24-hours after their historic and nail-biting Champions League win against Bayern Munich in Germany last night.

Scott Coleman, owner of the North & South London centre worked through the night with a team comprising of several members of the Totally Dynamic group, to deliver two fully wrapped buses for the ecstatic Chelsea team.

Scott said, "we had to start wrapping the buses before the game actually started on Saturday as it would have been impossible to have completed the project otherwise. We were all listening to the Champions League match live on the radio as we worked, and were absolutely dreading the penalty shoot out at the end. We finished wrapping the buses at 5am this morning and we will be glued to the TV this afternoon to see our handywork being showed off."

The 2 open top buses round off a jam packed week for Scott and his team who were also responsible for delivering 14 vehicles for Samsung that are accompanying the Olympic Flame on its 70 day journey around the UK, which started on Friday.